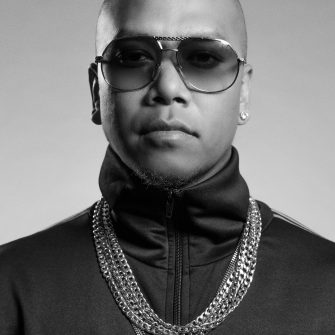 Chuckie, is a 2-Time Mobo award winning South American producer and DJ. He has let his legendary mixing skills and plush production do all the talking with his saucy blend of Hip-Hop, Latin and Dutch House music leading him to work with the likes of J Balvin, Anitta, Trinidad James, Lupe Fiasco and Too $hort. Having carved out his own lane early in his career Chuckie was dubbed “The King of Mixing” and lead him to rework singles from industry leading recording artists P. Diddy, Michael Jackson, Enrique Iglesias, Jess Glynn, Rihanna, Sean Paul and many more.

MTV Awards, Gold and Platinum Discs, Magazine Front Covers, Residencies on a global basis, we could wax lyrical about all these things for page after page, the reality is simple, in this day and age of push button, sync DJ’s, Chuckies talent stands him head and shoulders above the 99% and places him firmly in the 1% of DJ’s who can actually rock a crowd from any angle with any genre.

As a producer and talent spotter, Chuckie it could be said is too far ahead of the curve for his own good, spotting musical trends super early and seeing young talent coming through and nurturing it come as second nature to this multifaceted artist.

Move forward into 2018 and the year has been nothing short of outstanding for Chuckie. He started the year in a massive way as co producer – with frequent collaborator from the Netherlands ChildsPlay – for J Balvin’s follow up to his 2017 global hit “Mi Gente” which featured Willy William and had a remix from Beyonce which all proceeds went to aid the relief effort for Hurricane Irma and Hurricane Maria in Central America. This went platinum in the US in a matter of weeks and has now amassed over 150 Million Spotify streams to date.

The J Balvin production named MACHIKA which features Brazilian superstar Anitta and Aruban newcomer ‘Jeon’ is testament to Chuckies ability to spot talent, Jeon is signed to Chuckie’s publishing company and followed the Machika writing up by penning X for Nicky Jam & J Balvin, this track went global and to date has over half a billion streams and over 1.5 billion You Tube Views, not a bad start for a fledgling publishing company.

Chuckie has been no slouch on the club front either releasing a brace of club records via Spinnin Records alongside running Dirty Dutch Music which continues to un unearth new talent and give it a platform via the label. Chuckie’s commitment to finding new talent across the music spectrum is testament to his ear for something ‘new’.

On the event front, Chuckie is set to be announced as the global resident for Tao Group worldwide for 2019 after his successful return to Marquee Las Vegas for 2018. The 2019 residency encompassed Las Vegas, Los Angeles, Chicago, New York, Singapore, Sydney to name but a few and was the first time in Tao’s long history that they have partnered up with an act on a global level.

To summarise, Chuckie has gone full circle, from Hip Hop in the 90’s and Commercial Dance Music, from Bubbling and Latin to Urban, reinventing himself yet again into the marketplace like very few other artists.